The ladies Gaelic training is starting back up in February. Yippppeeeeeee! 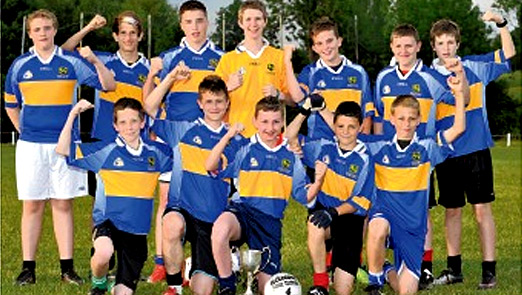 Club chairman Michael Walker said: “There has been a lot of time, effort and money gone into the team and it’s great for the club and the whole of the management.” The under-14s have been together for four years. They were short of experience at the start, but their training and hard work has paid off.

Noamh Padraig are based at the Emerald Centre, Gypsy Lane. They have six junior teams starting from under-10s plus a senior men’s and women’s teams.

Naomh Padraig is one of the fastest growing gaelic football clubs in Britain today.

Hi, We’re Naomh Padraig gaelic football club and we think we’re pretty hot stuff on the gaelic football scene. Why? You may ask. Well, we try hard as a group to fulfill our commitment to the club. That includes the chairman, managers, selectors, committee – right down to the wonderful parents who ferry our young players up hill and down dale each week.

The club has a number of teams to suit all ages and both genders. Firstly there’s the youngsters – starting with the under 10’s then the under 12’s, 14’s and 16’s. Next are the ladies, managed by Mary McElwaine . Mary recently took over the position from Jackie Duffy (the touch-line tiger). Unlike Jackie, Mary is more of a ‘note taker and explain things at half time’. Rather than the hair-dryer treatment dished out by Duffy. That said, Jackie will be greatly missed. ‘Thanks Jackie’.

Like any good club we are always looking for new players. You don’t need to be the next Colm Cooper either, although that would be great for us if you were. We welcome people of all ages both men and women, and all we ask is that you show a commitment to yourself, the club, the management and your team mates. In return you’ll meet some fantastic people who’ll always be there for you not to mention getting yourself as fit as a fiddle.

There’s a good social scene at the club too, we don’t take ourselves too seriously. Come down and see us, get yourself a pint of the black stuff – and we’ll introduce you to everyone. Come on you’ll love it – the Guinness that is, it’s a crackin pint.

…St Brendans. Success in the final of the Intermediate Championship, at Pairc na hEireann, in Solihull, means Naomh Padraig (St Patrick’s), have secured a place in the Warwickshire Senior League next season.

The Leicester team, who are based at the Emerald Centre, in Gipsy Lane, beat Birmingham club St Brendans by two goals and 12 points (18) to three goals and seven points (16) in a tournament they have not won since the 1970s. Coach Martin Niland said: “This caps a great year for the club.

This year and the senior team have played fantastically all season. “The senior league includes the best teams in the country, so the boys are going to have to take some of this winning formula and take it into next season.”